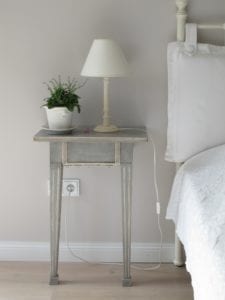 Electricity can be dangerous. Power surges from lightning or line issues have the potential to damage sensitive equipment or costly appliances such as TV’s. At the same time, every day usage of common electrical products (e.g. hair dryers, power tools, microwaves) can lead to similar surges or increased power loads that can cause dangerous arcs or ground shorts which are dangerous to people.

The NEC has rules in place that require the placement of ground fault circuit interrupters (GFCIs) and arc fault circuit interrupters (AFCIs) in certain places within the home. In Phase Electric & Air knows these rules, and we also recognize when it’s beneficial to have a little extra protection for older wiring or non-standard use cases. So trust the experts and take a few minutes to re-evaluate the protections on your home and family.

This is the most common type of electrical circuit protector you’ll see. In fact, GFCIs are often built into the plugs of space heaters, hair dryers, and other high-load electrical appliances. The National Electric Code requires GFCIs to be built into any electrical receptacles or outlets that may come into contact with water or be used for high-load appliance (such as power tools).

GFCIs are safety devices that disconnect the circuit when they detect a sudden short running to ground. A short in the electrical circuit will overload your circuit breaker but it also has the potential to deliver a deadly electrical shock or start an electrical fire before the breaker has a chance to trip.

Don’t forget to test you’re the GFCI outlets in your home at least once a month. Simply press the “test” button. If the reset button pops out with a loud click, then your interrupter works perfectly. Otherwise, get the outlet replaced immediately.

Similar to the GFCI, an AFCI is part of your home’s safety system. It watches the circuit for large power spikes caused by electrical arcs. Unlike your circuit panel which only trips at high loads or your GFCI which disconnects in the event of a short, AFCIs are capable of recognizing dangerous electrical arcs across open air. Once an arc is detected, the AFCI disconnects the circuit, to stop further damage or injury.

Even then, the best place to stop a surge is before it has the chance to damage anything on your system. Lightning strikes and strong power surges are capable of bullying straight through most defenses. When this happens, standard power strip surge protectors are no match for the destructive power coursing through your electrical grid. A whole-home surge protection system is the only thing that will stop it.

Whole-house surge protectors use a system that is similar to what you’ll find in a standard power strip. The main difference is that they’re designed to handle large-scale power surges. They carefully shunt the excess energy to a safe ground away from your home’s electrical system and can do this multiple times for years to come.

There’s no reason to worry during a storm about the safety of your electrical system. Even if the power goes out, you’ll be safe from dangerous electrical surges, and these protectors are far easier to replace than an entire electrical panel.

So when you need repairs or a new safety evaluation for your home, look no further than In Phase Electric & Air. We’ll help you upgrade to most current electrical safety devices on the market.

Get Social With Us

We use cookies to ensure that we give you the best experience on our website. If you continue to use this site we will assume that you are happy with it.Accept